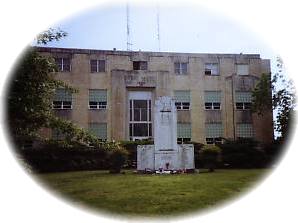 Haskell County is located in eastern Oklahoma in the second tier of counties west of the Arkansas line.

Two of the largest rivers in Oklahoma, the Arkansas and the Canadian, mark the northern boundary. Cargo is shipped by barge from the Port of Keota to the Arkansas River. The Robert S.Kerr Reservoir is not only a recreational haven, but the locks on the Arkansas River Navigation System are an amazement to watch as well as touring the learning center about the system. Haskell County is connected to all parts of the world through this navigation system.

The county was created in 1907 by the Constitutional Convention and was named in honor of Charles N. Haskell, first Governor of the State of Oklahoma. The first white men to explore this region were the French in 1719, who established no permanent settlements and the Indian tribes dominated the area until two centuries later. The Quapaw Indians claimed hereditary rights to that portion from the Mississippi River westward to the then rather indefinite limits of the United States, between the Arkansas and Canadian rivers on the north and the Red River on the south. By the treaty of August 24, 1818, they relinquished all claim to the country that was to be organized later by the Choctaw Indian government. This was the first cession of land by Indians in present day Oklahoma. Haskell County is within this area.

Something about Haskell County Cities:

Keota - Keota is the Choctaw word roughly translated as "fire gone out." It refers to a tribal tragedy in which 175 newly-arrived Choctaws died from pneumonia, wiping out an entire town! Keota sits on the edge of Robert S. Kerr Lake.

Kinta - (Indian for "beaver") Just east of Kinta you'll find the Sans Bois community, now marked by a cemetery in which many members of the illustrious McCurtain family are buried. The name honors a well-known Choctaw family - the father and all three son's graves are here. The Green McCurtain Historic Home is located adjacent to Sans Bois Cemetery.

McCurtain - Another old town, with an illustrative history and what is believed to be, today, the nation's deepest coal mining operation. Settled in 1890 as Panther, it changed it's name to honor Green McCurtain, last elected Chief of the Choctaw Nation. At one time, it was Haskell County's biggest town, with hundreds of mining families. McCurtain has seen its share of disasters, with a destructive tornado attack in 1957 and several mining explosions, one killing 73 in 1912.

Porum - An old farming community, is perhaps best known as one-time home of Tom Starr, one of whose sons, Sam, became the husband of notorious outlaw, Belle Starr. Sam married the Confederate spy, Myra Belle Shirley, whose first husband was Jim Reed, a Quantrill raider. Belle and Sam's farm near Eufaula soon became an outlaw hideout. Both eventually met violent deaths. Her badly vandalized stone crypt and once elaborate tombstone are in a briar-guarded field near Lake Eufaula southwest of Porum.

Quinton - Settled about 1900, Quinton was named for a prominent area Choctaw, Martha E. Quinton. Impressive concrete ruins east of town are all that remain of a large zinc smelter. The once-active mines were north and west of town.

Stigler - Stigler features such attractions as the Brier Creek Golf Course, Lake John Wells, Haskell County Historical Museum and some of the best festivals in Oklahoma.

Tamaha - One of Oklahoma's oldest towns (and quite picturesque), Tamaha was a steamboat landing on the Arkansas River before the Civil War. Tamaha witnessed the Civil War's only naval battle fought in Oklahoma, the capture by Confederates of an armed steamboat, the J.R. Williams. Also note the ancient cemetery on a wooded bluff overlooking Robert S. Kerr Lake. The Tamaha Jail, while not worth an extended stay, is rather interesting. It's Oklahoma's oldest jail. A nearby oak tree is Oklahoma's largest oak.

Whitefield - There's an unusual quirk to this small trading community - it was first named "Oklahoma" (1881). However, the postal service required a name change so that people wouldn't confuse it with "Oklahoma Station," now present-day "Oklahoma City." Whitefield was named for early-day Methodist Bishop George Whitefield, but holds the distinction for being the first place in Oklahoma to be named "Oklahoma."

If ever there was a hunter and fisherman's haven, it is right here in Haskell County. From the plentiful lakes and rivers to the densely wooded rolling hills, the outdoor sportsman will think he is truly in paradise. This county has plentiful populations of deer and turkey

This is a USATF sanctioned certified run. There will be a 5K run, a 1 mile walk and a .5K run for children and is Sponsored by the First Baptist Church of Stigler. Registration $20 for adults a Race to Grace T-shirt $10