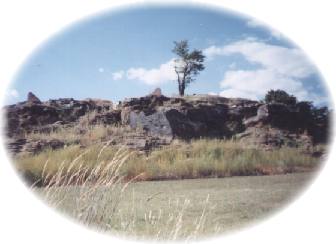 The history of the area that was later to become Barton County, Kansas has an ancient beginning in relation to man, perhaps even more so than her sister counties. This situation was caused by a combination of several phenomena of nature that attracted man to this area. The flood plain created by the Walnut Creek and Arkansas River produced luxuriant pasture which attracted the great game herds which in turn attracted man, the hunter.

For man to cross the Great American Desert he required dependable supply of wood and water. The Arkansas River and the Walnut Creek furnished these essentials and so ancient man crossed the area in his travels in search of food and trade articles by following a trail adjacent to the river.

"Long before William Bicknell and his trading party in 1820, followed The (Santa Fe) Trail along the Arkansas River through Kansas to Santa Fe, Indians carried goods from California, thru Kansas, to Minnesota over The Trail. Coronado used it in exploring North America in 1541; Zebulon Pike arrived at Walnut Creek in 1806; 1812 it led McNights party and in 1825, Major George C Sibleys' government survey team; 1829 Major Bennet Riley's Infantry shot its first Buffalo of the expedition."

The Barton County area has many historic points on the Santa Fe Trail, including Fort Zarah, and the Walnut Creek Crossing. A common presence to all of these travelers is Pawnee Rock in the Southwest corner of Barton County, now a national landmark.

The Expo Complex is the ideal location for a variety of events. The Expo complex consists of nearly 100,000 square feet of indoor space in three buildings and over 900,000 square feet of outside paved exhibit space. There are also electrical services available to all outside spaces.

The L. E. "Gus" and Eva Shafer Memorial Art Gallery has been referred to as the "Gem of the Campus"

The Museum was founded in 1990 by a group interested in preserving the history of the oil and gas industry.