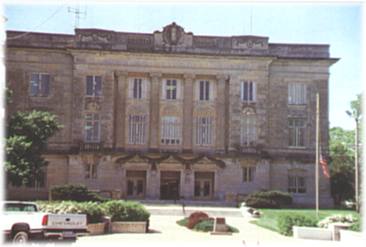 Many things went into the birth and growth of Brown County and its towns. Like many others across America, these small towns consist of more than just a few square miles and square blocks of wood and bricks and soil, they also consist of the vision and toil of hundreds of individuals. Let us quaint you with our: HOMETOWN HOMILIES.

The Missouri Pacific Railroad, so vital to Everest's beginning, still runs through this active community of 300+ people today. Everest has a fine library and a large museum housed in the three story brick building which originally served as the grade and high school.

It was agriculture that brought settlers to this area in 1886 and is still the mainstay of the economy today. Unlike many area towns, Fairview's roots are not wrapped around railroad tracks.

Morrill was named after E.N. Morrill, who was elected to the Legislature and served as governor from 1895 to 1897. A Sac and Fox Indian Trail ran a short distance west of the town and the mounds of two of Jim Lane's old forts were still visible a few miles away until the end of the century.

A great trading post, stock and grain were shipped in and out in car-loads. The Iowa's (Indians) came to town and were good traders. The relationship between the reservation and town remains strong today.

The Brown County seat since 1858, Hiawatha was named after the Indian brave in Longfellow's poem Song of Hiawatha.

The construction of the Rock Island Railroad throughout the state of Kansas in 1886 fathered the city of Horton. Within 16 months the new town had a population of 4,000. It was a Boom Town and grew so rapidly that it was called the "Magic City".

The city began in 1857 when a Post Office was established near a sawmill built by E.N. Morrill. Morrill named the town Hamlin in honor of a friend who was a congressman from Maine.

This town sprang into existence in unison with the building of the Rock Island Railroad across the southwest corner of the country in 1887. Today's community depends on their strong faith and agriculture.

Founded in 1859 by anti-slavery settlers brought from the East by Dr. Robinson. The town's namesake was to become the first free state governor of Kansas.

Each treaty moved the Kickapoos, who were primarily an agricultural/hunting tribe, a little more to the west from Illinois until in 1832 they settled on 1.2 million acres in what is now northeast Kansas. Today the tribe controls 5,000 acres of the original area on which 600 of the 1,400 members live.

The Iowa came to Kansas from Minnesota in the early 1800's. The Iowa's are farmers at heart and began purchasing farm land for tribal use about 20 years ago. From 300 to 400 of the remaining 2,000 enrolled members actually live on the current 2,000 acres in Kansas and Nebraska.

The tiny community of Reserve is where the smallest Kansas tribe, 360 members, has its headquarters. The only gas station and convenience store in town is owned and run by the Nation. The tribe has even purchased Reserve's old schoolhouse and hopes to convert it to a community center and a joint venture health center for Indians and non-Indians alike.

In 1901, the History and Literature Club, which had been organized in 1891, wrote a letter to Andrew Carnegie requesting his help in creating a public library in Horton. This encouraged Federated Women's Clubs to get a tax levy for establishing a library and in 1938

The Casino is owned by the Kickapoo Tribe in Kansas, located 6 miles West of Horton, KS on Highway 20. It's Las Vegas style gaming at a friendly pace. Come, stay as long as you like, our "boat"