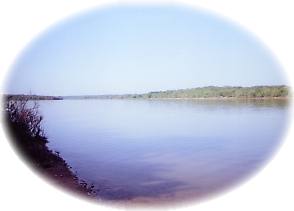 Cleveland County is located in the center of Oklahoma with the South Canadian River forming a diagonal west and south border, and wherein lies beautiful Lake Thunderbird.

In 1870, the United State Land Office contracted with a professional engineer to survey much of Oklahoma territory. Abner E. Norman, a young surveyor, became chairman and leader of the central survey area in Indian territory. The surveyor's crew burned the words "Norman's Camp" into an elm tree near a watering hole to taunt their younger supervisor. When the "Sooners" (those who headed west before the official Land Run date, April 22, 1889) and the other settlers in the heart of Oklahoma, they kept the name "Norman." Today, the county seat of Cleveland County is the third largest city in the state.

While other Oklahoma towns were battling to be the capitol, Norman's Mayor, T.R. Wagoner, directed a bill through the Territorial Legislature to become home of the state's first institution of higher learning. In 1890, Norman was chosen as the location for the University of Oklahoma (OU), today recognized nationally for it athletic and academic excellence.

Norman is also home tothe nationally renowned Sam Noble Oklahoma Museum of National History. Plus, Norman is rich in Oklahoma history and boasts homes and sites that have stood since the turn of the century. Norman recognizes the cultural and economical importance of art offering art centers, galleries, and performances that are among their most visited attractions.

Early May is the time to visit Noble for the Rose Rock Festival and to stop in the Timberlake Rose Rock Museum to see the legendary rose rock found only in Oklahoma.

Built in 1929 for the new "talking pictures," the Grand Dame of the city is listed on the National Register of Historic Places and the Oklahoma List of Historic sites. The elegant Spanish Gothic theatre annually attracts some 20,000

United Design is one of the world's largest makers of figurines. Visitors can see more than 5,000 designs at the factory located south of Norman in Noble. Watch as artisans and craftsmen complete animals from several of the collections, including "Stone Critters"

Located in a city park known as "Legacy Trail," the north side of the depot is now the home of the Norman Arts and Humanities Council. Grounds can be used for special events and currently display public art sculptures of bronze and wood produced by Oklahoma artists. On the

This award-winning 18 hole course ranks in the top ten in Oklahoma for the sixth straight year in a row! Perry Maxwell first designed this course in 1951 and Robert Cupp redesigned it in 1996

The Firehouse Art Center is Normans center for visual arts education, offering a gallery, gift shop and classes for adults and children. Housed in a 1946 fire station, the art center includes a clay studio complete with a fireman'

The Timberlake Rose Rock Museum showcases the official rock of Oklahoma, a reddish-brown sand-barite stone that is naurally formed into a rose. Indian lore states that the rose rock was God's gift to the Cherokee for their long journey on the Trail of Tears. Braves' blood and the maidens'

Welcome to The Perfect Swing Family Fun Center, Norman's premier establishment for year-round fun. We offer fun activities for kids from ages 2 to 92. From the city'