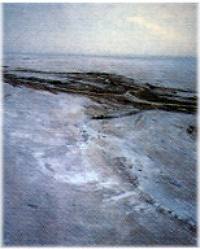 Great Salt Plains State Park boasts the only spot in the world where people can dig for "hourglass" selenite crystals. The crystals emerge from the enormous salt flats and are found just beneath the surface. The crystals are quite fragile and require a shovel or hand spade for their retrieval. The digging is seasonal, from April 1 through October 15.

The salt flats themselves are literally a sea of salt. It is one of Oklahoma's most unusual geological phenomena. One theory of their existence states that the flats represent the remains of a prehistoric sea. The salt flats aren't the only noteworthy resource of Great Salt Plains, for a large federal wildlife refuge is located next to the state park.

Great Salt Plains Lake covers 9,300 acres with 41 miles of shoreline and is understandably, a shallow, salty lake--about 1/3 to 1/2 as salty as the ocean. The premier channel catfish lake also offers fishing and boating activities.

There are seven comfort stations (three with showers) located throughout the park, including at least one in each of the campgrounds; and one sanitary dump station is available for recreational vehicle use. Semi-modern campground and comfort station in River Road is open year round. Other comfort stations are open from March 15 to October 31.

Great Salt Plains Cabins
Six cabins each feature a fully-equipped kitchen, a double bed and a hide-a-bed. The cabins are air-conditioned and heated. Five of the cabins will each accommodate four guests. One larger cabin, furnished with two double beds and a hide-a-bed, will accommodate six guests. Cabins are provided with cookware, dishes, utensils, towels, linen, and cleaning supplies. There are no telephones, television or fireplaces in the cabins. Cabins are available year round.

The George Sibley Trail, is a seven mile, multi-use trail for horses, hikers, and mountain bikers (an equestrian campground is available).