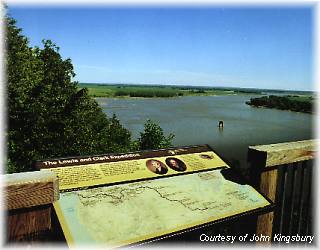 Situated astride the picturesque Missouri River bluffs in northeastern Nebraska, Ponca State Park is at the eastern gateway of the Missouri National Recreational River, a 59-mile section featuring the only unchannelized section of the river bordering Nebraska. Designated under the Scenic River Act in 1978, this section of river gives visitors a glimpse of how the untamed river looked before modern man changed it forever.

The park is two miles from the town of Ponca, just off of Nebraska Highway 12 on S-26E. Both the park and the town are named for the proud Native American tribe that once inhabited the area. It was the famed Ponca Chief Standing Bear who fought and won the court battle to have the Indian declared a "person" under American law. His achievement won him a place not only in history but also the Nebraska Hall of Fame. Here, too, Lewis and Clark passed through during their epic journey up the Missouri.

The National Park Service has designated Ponca State Park as part of the Lewis and Clark Historical Trail. Developed and operated by the Nebraska Game and Parks Commission, Ponca State Park encompasses 892 acres of heavily forested rolling hills. The superbly scenic area offers park visitors all the amenities of a modern state park. Established in 1934, the first 200 acres were donated by local citizens, sponsored by the Ponca American Legion Post.

Ponca has excellent camping, with 72 paved pads complete with 30-amp and some 50-amp (additional charge) electrical hookups. Other facilities include two showers, restrooms, picnic tables, fire rings, drinking water and a playground. Fees are charged for all camping, with an additional fee for electricity. All camping is on first-come, first-served basis and stays are limited to 14 consecutive days. Weather permitting, modern facilities are open from mid-April to mid-November. Primitive camping is available year-round. While there is no separate area for group camping for organizations or family reunions, they can be accommodated in primitive camping areas where there are no electrical hookups.

Ponca SP Camping
The park has 14 modern, two-bedroom, air-conditioned housekeeping cabins. Each has two double beds, bedding, towels for four, bathroom with shower, kitchenette and large screened porch. Kitchenettes are furnished with a range, refrigerator, cooking utensils, dinette, dishes and tableware for six. Rollaways and cribs are available for an additional charge, but no more than eight people and two extra beds are allowed per cabin. No camping is permitted in the cabin area. Lodging usually is available from late April through November. Cabins are available for spring turkey and fall pheasant and deer hunting.

Reservations are accepted up to one year in advance for two or more nights and will be confirmed with a deposit for two nights lodging. Deposits can not be refunded under most circumstances. Checking out after only one night will result in a forfeit of the second night's deposit. All reservations are on a first-come, first-served basis. Check-in time is 4 p.m., and check-out time is 11 a.m., unless other arrangements are made in advance with park superintendent. While no advance reservations are accepted for one night's lodging, cabins might be available first-come, first-served for overnight stays. To make reservations or to request additional information, call the Ponca State Park office.

Ponca SP Nature Activities
Ponca State Park has an on-site naturalist to help guide and educate visitors on the history, biology, ecology, astronomy and geology of the area. Daily and nightly events will be planned for adults and children. Activities include star-gazing, owling, Lewis and Clark studies, rocks and fossils, nature hikes, bugs and butterflies, and flora and fauna identifications.

The dense woodlands offer a haven for many types of woodland wildlife. During the day, white-tailed deer and wild turkeys often are seen throughout the area. Toward evening, the howls of coyotes and "who-who-are-you" of the barred owl echo through the hills. Red foxes, gray foxes (an uncommon relative of the red fox), bobcats, raccoons, opossums and other small mammals also occasionally are seen by visitors.

Bur oaks are the predominant tree species at the park, but they are liberally interspersed with walnut, elm, basswood, Kentucky coffeetree and hackberry. Almost at the heart of the park is the "Old Oak Tree." In 1964, this ancient specimen was officially aged at 320 years old. It was a sapling 24 years before the Mayflower landed at Plymouth Rock.

On summer nights, the repetitious call of the whippoorwill and a chorus of tree frogs and crickets echo through the bluffs and canyons. Turkey vultures can be seen soaring overhead during warm summer days. In late June, snow-like showers of cotton from nearby cottonwood trees signify it is time to catch catfish in the nearby river.

In fall, the skies are filled with migrating ducks, geese and other birds. In winter, the park is home to bald eagles, often seen roosting, soaring and now nesting along the river. Winter is also a great time to view a variety of hardy songbirds at the park's bird feeders.

Ponca SP Trails
With more than 17 miles of trails, the park provides hikers and bikers with ample opportunities to explore and view the diverse flora and fauna close up.

Ponca SP Swimming
In summer, swimmers can cool off at the modern pool, where lifeguards are on duty. Fees are charged for adults and for children 7 to 16 years old. Children 6 years old and under are admitted free when accompanied by a paid adult. Swimming is not allowed in the river because of the swift and unpredictable currents.

Ponca SP Boat Access
A boat ramp is located just north of the park headquarters for access to the Missouri for boaters and anglers. Anglers will find good action on catfish and other river species.

Ponca SP Cross Country Skiing
More and more snow lovers are discovering the wintertime fun found at the park. Cross-country skiing and snow shoeing are becoming a popular way to enjoy many of the park's trails.

Ponca SP Golf
The Highland Oaks Public golf course is located on the southern boundary of the park. The challenging 9-hole course offers spectacular park vistas and a luxurious clubhouse.

Cookouts are scheduled every summer holiday weekend and during other special events. Call the park office in early spring for a schedule.

Two shelter houses are available for family and business get gatherings. A fee is charged for reservations, but the houses also are available on a first-come, first-served basis.