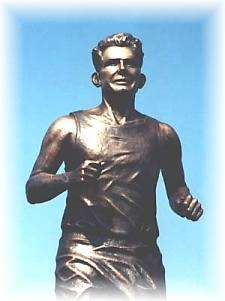 Nine miles north of Claremore on Route 66 is Foyil, the hometown of ANDY PAYNE, a Cherokee Indian who was born on a ranch between Claremore and Foyil. At "66" and 28A, turn south, and you will be on the main street of Foyil and a portion of the original Route "66". Go two blocks, and a monument to Andy Payne is displayed.

In 1928, 274 runners from all parts of the world gathered at the starting line in Los Angeles to participate in the International Transcontinental Foot Marathon. The race would follow Highway 66 and would pay $25,000 to the winner. The press dubbed this the "Bunion Derby". Three and a-half months and 3,422 miles later, Andy was declared the winner at the finish line at New York's Madison Square Garden. He used the money to pay off the mortgage on the family farm. In 1934, he became the Clerk of the Oklahoma Supreme Court and held that office until retirement.