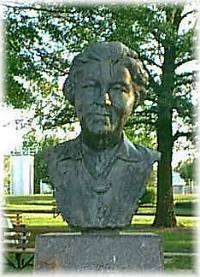 Well known sculptor William J. Williams is the creator of the collection of
bronze busts of famous Missourians that are on display in the State Capitol
Building in Jefferson City, Missouri.

When Mansfield citizens learned that a bust of Laura Ingalls Wilder was being
created to be included in the capitol building display, they raised funds and
commissioned a display in the Mansfield City Square.

Mr. Williams unveiled his work in Mansfield on Wilder Day of 1993. On the base
of the pedestal are eight "plaques", each containing the name of one
of Laura's books.