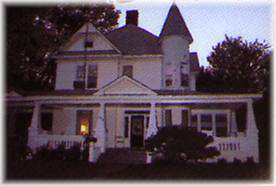 223 S. Smith - Built around 1884 by M.E. Milford. Mr. Milford was the business manager and later the owner of the "Indian Chieftain," the daily paper. He was also one of the organizers of First National Bank in 1892, the second bank in Indian Territory.

147 S. Adair - Built in the early 1900's by Lucian Buffington, cousin of Cherokee Chief Tom Buffington. Mr. Buffington was also one of the organizers of First National Bank and later served as its first vice-president. He was a member of the Vinita Townsite Board in 1898.

146 S. Adair - Built by John Turner in 1904. He was active in support of statehood for the two territories. He was elected one of the members of the State Supreme Court in 1906, a post he held until 1919.

439 N. Foreman - Built in 1897 by W.H. Kornegay, a prominent Vinita attorney and jurist. Mr. Kornegay was a member of the Constitutional Convention in 1906, and took an active part in writing that document. He was also instrumental in the naming of this county "Craig" for a close friend at Welch, Granville Craig.

451 N. Foreman - This magnificent home was a wedding gift. It was built in 1899 by J.O. Hall for his daughter, Ludie, at the time of her marriage to Luman Parker, Jr., an attorney and later judge. Mr. Hall, a wealthy cattleman, is said to have had the glass for the stained glass window of this house shipped in from France.

102 S. Third - One of the earlier homes in Vinita, this brick structure was built by W.O. Trott who was in this area before the railroads came through in 1868.