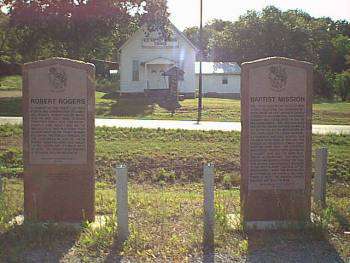 A signer of the treaty of New Echota and grandfather of famed Will Rogers. Robert Rogers moved with his wife, Sally Vann, to Indian Territory about 1837, and established a home about 1 mile northwest. He was killed in 1842 in a tribal feud as were many of the treaty signers following the forced removal of the Cherokees in 1838-39. He is buried near his home site about 1/2 miles north and 3/4 mile west of here. His widow later married a Virginian, William Musgrove.

Rev. Jesse Busyhead settled here in 1839 following the Cherokee removal from the east and held church services at his home until the Baptist Mission was established in 1841 by Rev. Evan Jones. This site was one of the ration stations known as GA-DU-HO-GA-DU, or Breadtown, by the Cherokee following the removal.

A Cherokee National School was founded near here in 1843 and the mission established a female seminary the same year. The Cherokee Messenger printed here beginning in August 1844 and was the first periodical in Oklahoma. The mission station was burned during the Civil War by the Confederates because of the anti-slavery teaching of the missionaries. While the mission never rebuilt, the church has continued to meet. The present church building was built in 1888.


Located across the street from the Old Babtist Mission Church built in 1888 and still in use.