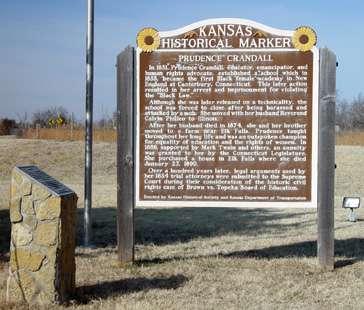 Is she America's most famous unknown woman? Learn about her fascinating life at this combined Kansas and Connecticut marker site. Her story was told in the Walt Disney/NBC-TV movie, She Stood Alone. Prudence Crandall is buried in the Elk Falls cemetery.

In 1831, Prudence Crandall, educator, emancipator, and human rights advocate, established a school which in 1833, became the first Black female academy in New England at Canterbury, Connecticut. This later action resulted in her arrest and imprisonment for violating the "Black Law."

Although she was later released on a technicality, the school was forced to close after being harassed and attacked by a mob. She moved with her husband Reverend Calvin Philleo to Illinois.

After her husband died in 1874, she and her brother moved to a farm near Elk Falls. Prudence taught throughout her long life and was an outspoken champion for equality of education and the rights of women. In 1886, supported by Mark Twain and others, an annuity was granted her by the
Connecticut Legislature. She purchased a home in Elk Falls where she died January 27, 1890.

Over a hundred years later, legal arguments used by her 1834 trial attorney were submitted to the Supreme Court during their consideration of the historic case of Brown vs. Topeka Board of Education.

Erected by the Kansas Historical Society & Kansas Department of Transportation

At the same roadside park is another marker:

The State of Connecticut proudly joins the State of Kansas in honoring the lifetime achievements of Prudence Crandall, educator and champion of human rights. Crandall's courage and determination serve as examples to all who face seemingly insurmountable odds and to those who refuse to be
limited by social conventions. To this day, her efforts to promote equality in education remains unequaled.

The building which housed Crandall's academy in Canterbury, Connecticut opened as a museum in 1984 and is administered by the Connecticut Historical Commission. The museum's national importance was recognized in 1991 when it was designated a National Historic Landmark by the U.S. Department of the Interior.

This plaque was made possible through the generous donations of citizens of the State of Connecticut.