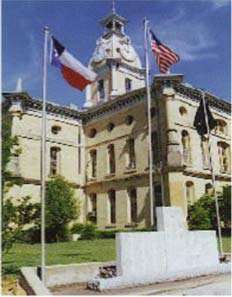 The Red River County Courthouse, listed on the National Register of Historic Places, dates from 1885, with its massive walls and turrets of yellow sandstone, and a remarkable clock tower. Affectionately called "Old Red," the clock ran smoothly until 1961 when it was converted to electricity. Soon thereafter, Old Red began striking 120 gongs until someone unplugged it; that period was known as "the night it got later than ever before" in Clarksville. The clock still tolls the hour for citizens of the town. Original records dating from 1835, the beginning of the Republic of Texas, are still on file, as well as deed and marriage records from 1845. The old jail, built from the same yellow sandstone, is nearby and serves as a museum.

Come visit us in Texas, Texas