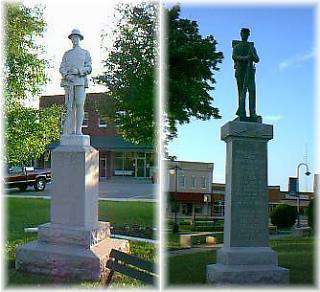 A bronze Civil War soldier stands facing south in the square. Its orientation
caused great controversy among the veterans of the Grand Army of the Republic
when it was first erected.

A marble soldier commemorates the dead of World War I. The statue was carved
in Italy, and a local stone mason re-carved it to bring it closer to the proper
doughboy image.

A simple triangular shaft is a memorial for the dead of World
War II, Korea and Vietnam.