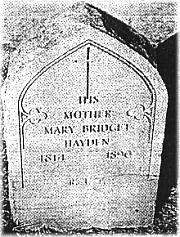 St. Francis Cemetery, located half a mile east of St. Paul, is by succession the oldest cemetery in Neosho county known to have been used by white people. When the Jesuits first came to the Osage country in 1847, this cemetery was established in the east edge of what is now St. Paul. Whether it had been used as a burying ground before that time is not now known, but most of the Catholic Indians who died after the arrival of the Jesuits were buried there. Rev. Fr. John Bax, S. J. was the first white person to have been buried in this old cemetery.

After the town of Osage mission was established, this old cemetery was within the city limits, so Father Schoenmakers set aside a site near Flatrock creek, which has since been used, and is known as St. Francis cemetery. In the spring of 1871, all the remains in the old cemetery were removed to the new one. By this time many white persons had been interred in the old cemetery.

The new graveyard is owned by St. Francis church and is well cared for. It is maintained under the perpetual up-keep plan. About 75 veterans are buried there, as are also Father Schoemakers and the other Jesuits who died while located here. Mother Bridget's grave has an honored position there, surrounded by other Sisters of Loretto who were pioneers in this Osage country.


... astonishing story of the Nun's Re-Burial

Entering the cemetery through the west gate, proceed south until you come to the first road going east. Turn left there and proceed east until you see a full-blown evergreen tree several yards to your left. Approaching that tree on foot, you will find a cluster of identical simple stones marking the graves of 17 Sisters of Loretto, including Mother Bridget Hayden.

Mother Bridget was one of four Sisters of Loretto at the Foot of the Cross from the St. Louis motherhouse who responded to Jesuit Father John Schoemakers plea in 1847 to come to Kansas to work among the Osage Indians. At Osage Mission the sisters founded the St. Ann's Manual Labor School for Indian girls to complement the school that the Jesuits had already established for Indian boys.

Mother Bridget spent the next 43 years at the mission, ministering to the physical, spiritual, and intellectual needs of the young women in her care. From 1859 until her death in 1890, she was the superior of the Sisters of Loretto there.

After the closing of the academy in 1895 after an extensive fire, the sisters withdrew, however, they left behind the mortal remains of 17 of their members in the convent cemetery, just across the road and to the west of the present St. Francis Church.

In 1892, the Jesuits also withdrew from the mission. Two years later the Passionist Fathers arrived. Over the years, the Passionists decided that the Sisters of Loretto deserved a more fitting resting place. In 1930, the remains of the 17 were carefully dug up by men of the parish. Although little remained of the bodies except a few bones, the remains were carefully identified and the bones were placed in separate infant-size caskets.

In Mother Bridget's case, however, the skeleton was in a perfect state; not a bone was out of place, and the habit was as fresh and clean as it was when she was buried in it 40 years earlier.

The caskets were taken to a basement chapel of St. Francis Church, and for two weeks people came from miles around to view the remains, especially the full-length skeleton of Mother Bridget. An estimated 2,000 people - both the devout and the curious - crowded the church for the Mass marking the second burial.

Francis Strauser, a lifelong parishioner of St. Francis Church, helped dig up the graves. There was no "rough box" for Mother Bridget, he recalls, just a black walnut casket that had left a firm imprint in the ground.

Many of the local people, knowing of the sacrifices Mother Bridget had made and the important work she had done, interpreted the incredible state of her remains as proof that the woman was a saint. To declare a person a saint, however - even a person as seemingly worthy as Mother Bridget - is not simple matter. The process, called canonization, requires years of research and documentation of the candidate's life and deeds. Thus far, the process has never been initiated for Mother Bridget.