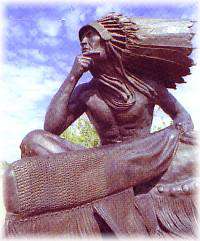 Standing in East Ciy Park, "The Vision Seeker" is a life size bronze statue of a warrior chief looking into the sunrise, or sunset.