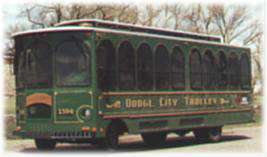 Learn Dodge City's history and folklore on a narrated tour of sites where history was made. Visit original locations of the Longbranch Saloon, Gospel Hill, the "deadline" and Front Street where "shoot outs" occurred in the early days of Dodge City. Tour Fort Dodge and see the Fort's 1860s military buildings. Ride along the roadbed of the Santa Fe Trail. Learn about the area's cattle industry, past and present.

Things to do Tours near Dodge City, KS