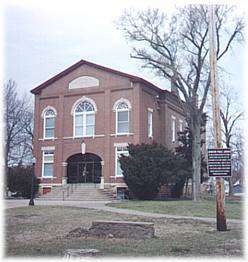 The grand old building was entered on the National Register of Historic Places in 1976. Built in 1872, it was intended to be the County Courthouse, but was never used for that purpose. Through the years the building has been a city hall, theater, and college. In 1905, Peter Nils Johnston, a Swedish immigrant, provided a bequest for the city to establish a permanent library in the building.

Things to do Historic Buildings near Baxter Springs, KS