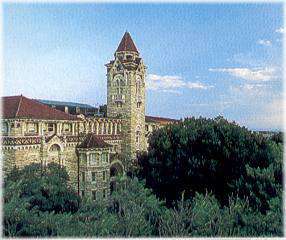 Established in 1866, this museum is nationally recognized for its public exhibits and collections as well as research and graduate education. The museum's exhibits are housed in Dyche Hall, on the main campus of the University of Kansas in Lawrence. Dyche Hall is listed on the National Register of Historic Places, as are three other buildings on campus.

The museum features a Panorama of North American plants and animals in a 186-foot continuous exhibit that presents realistic scenes of wildlife from the artic coasts of Alaska to the tropical rain forests of Mexico. Permanent exhibits include fossils of dinosaurs, reptiles, fish, mounted mammals and birds, live bees, and snakes. The museum is also home to Comanche - the horse that was the only U.S. Army survivor of the Battle at the Little Bighorn, and Annabelle, an impressive 50-foot-long, 140-million-year-old camarassaurus dinosaur. Annabelle was found in Wyoming along with an adult male and baby camarasaurus, the first discovery of such a family grouping.

Admission: Contribution: $3 Adults, $2 children
Hours: 9 a.m. to 5 p.m. Tuesday through Saturday
Noon to 5 p.m. Sunday
Closed on major holidays.
Address: 1345 Jayhawk Blvd. Located in Dyche Hall at 14th Street and Jayhawk Boulevard.
Phone: 785-864-4450
Our Email: naturalhistory@ku.edu
Our Website:naturalhistory.ku.edu
School groups: The museum offers a variety of programs for school groups. Contact the public education department for more information. Call (785) 864-4173 or email the director of public education. Parking, restrooms, and exhibit halls are accessible to people with disabilities. The ground-level entrance is north of the main entrance.