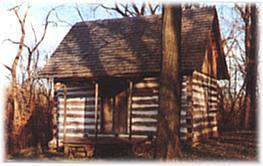 The log cabin was built east of the Lowell Cemetery in the 1870s. R.A. Hibbard built it as a home for his brother-in-law's family. Kent Lynch purchased the property and donated the cabin to the Historical Society in memory of Marsah Moncrief Lynch. In 1987, the cabin was taken down and rebuilt on this site. New shingles were hand-hewn from trees on the original cabin site. The cabin is furnished and may be seen upon request.

The cabin is located on the grounds of the Historical Museum.

Things to do Pioneer History near Baxter Springs, KS