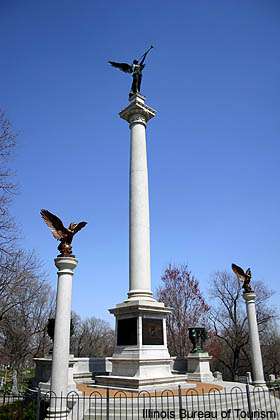 The Lovejoy State Memorial of granite and bronze commemorates abolitionist newspaper editor, Elijah P. Lovejoy, who was killed by a mob while defending his printing press at Alton on November 7, 1837. Lovejoy's grave is located nearby.

We currently do not have any events for Alton, Illinois in our database. If you know of events taking place, please add the event
.

Things to do Memorials near Alton, IL

This memorial commemorates Camp Dubois, the 1803-4 winter camp of Lewis and Clark, from which they launched their Corps of Di...

Edward Coles was the second governor of Illinois (1822-1826). A former slaveowner from Virginia, Coles became an abolitionist...