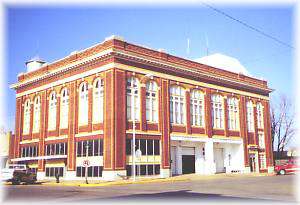 The building was constructed for the use as the City Hall in 1912 by the City Administration. All city offices were located there, including the 2-horse Fire Department. Its upper floor was an auditorium, seating 1200. Through the 1930s, it was the site for all school activities as well as major entertainment and County-wide events.

During the Depression years the WPA located its offices there. In the 1940s, the upper floor was used by Teen Town and several square dance clubs, plus USO dances.

After abandonment for several years, Shortgrass Playhouse Community Theatre took over and rehabilitated the auditorium area. This project cost approximately $75,000 plus hundreds of volunteer hours. It has been listed on the National Register of Historic Places.

Things to do Historic Buildings near Hobart, OK