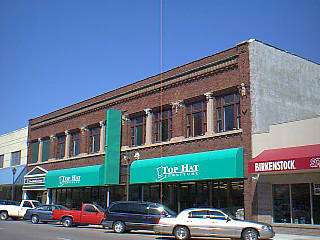 For more than 30 years after the turn of the century, the Stein
Brothers Store provided quality merchandise from all over the world to south
central Nebraska shoppers. Located at 620 West Second Street, the Stein building
was easily identifiable by the unique lion's head on the brick facade. It was
built in 1906 by former Nebraska Governor and U.S. Senator Charles Dietrich
after fire destroyed an earlier Stein's Store at the same site. Stein's closed
on November 17, 1933, in the midst of the Great Depression. From 1934 to 1968
Montgomery Ward's occupied the building, which is on the National Register
of Historic Places as an outstanding example of Prairie-style commercial
architecture.