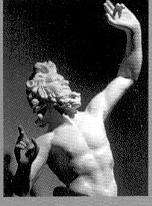 Life-size plaster casts of ancient Greek and Roman sculpture and antiquities, such as vases and coins, are a part of this collection established in 1888 by A.M. Wilcox, Professor of Greek.

Hours: M-F, 9:00 am - 4:00 pm during school terms; it is not open during the summer or school or federal holidays
Address: 1410 Jayhawk Blvd. Located in Mary Amelia Grant Gallery, Lippincott Hall on the Kansas University campus.
Phone: 785-864-3153
Our Email: jyounger@ku.edu
Our Website:wilcox.ku.edu/
Parking in lot near Memorial Stadium