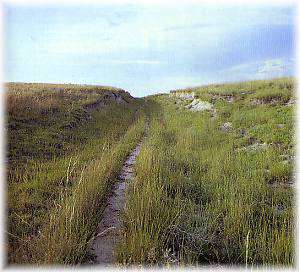 California Hill was climbed by thousands of emigrants heading west during the covered wagon migrations of 1841-1860. Most were bound for Oregon, although California became the destination for many travelers after gold was discovered there in 1848. The most important crossing of the South Platte River during this period was south and a little east of California Hill. After fording the river and ascending California Hill, the emigrants traveled northwesterly to Ash Hollow.

A National Historic Landmark, California Hill was the first major grade immigrants were forced to climb after leaving the Missouri Rive. The passing of thousands of wagons up the hill has left deep, visible ruts.