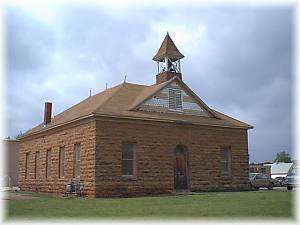 The 1904 Stone School House was built as a subscription school on the Osage Reservation. The building was also used for early church services, funerals, and plays.

Literally saved from the bulldozer in the 1960s, it now serves as the administrative office of the Hominy independent school district.

Things to do Historic Schoolhouses near Hominy, OK