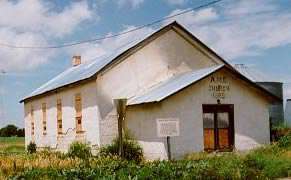 Area residents founded the African Methodist Episcopal Church (A.M.E.) in 1879. Members initially met in a sod structure. In 1885, the sod church was replaced with a limestone structure. In 1910, the congregation moved into an existing church structure that was previously owned by the Mt. Pleasant Baptist Church.

In the 1920s, the congregation changed a window to a doorway and added a vestibule to provide protection against the wind. They continued to use the structure as a church until circa 1940. Mr. Alvin Bates acquired the structure for storage purposes in the 1950s. The A.M.E. Church has exterior limestone walls that, like other stone buildings in Nicodemus, were covered with stucco in the 1940s. Rectangular in plan, the single-story structure has a gabled roof, as does the vestibule with double doors on the east side. The south side has four regularly spaced windows; the north side was similar, but has collapsed and was replaced with plywood on the stud walls.

The AME church is preserved as a National Historic Site by the National Park System.