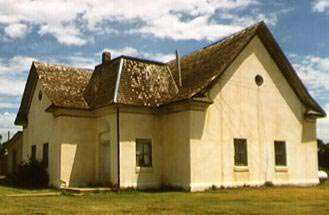 Several structures in succession, all at the same location, housed the congregation of the First Baptist Church from its founding in 1877 to the present. The group initially worshipped in a dugout, which was replaced by a soddie, another dugout, and eventually a small limestone structure. The current structure, an L-shaped building with intersecting gable roofs, was completed in 1907. The exterior walls are limestone, and the structure was coated with stucco circa 1940. The 1960 addition features concrete unit masonry covered with stucco. The building has several irregularly spaced and shaped buttresses of limestone rubble coated with stucco. An articulated vestibule at the intersection of the ell segments marks the entrance to the church.

The First Baptist Church is preserved as a National Historic Site by the National Park System.