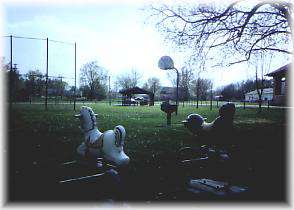 
The park is adjacent to the Santa Fe Depot - the departure point for the Midland Railway.