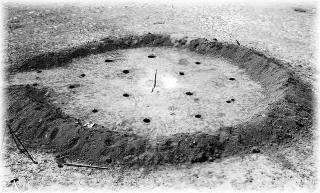 Situated on a prominent natural terrace near the Loup River valley near Genoa, the Burkett Site comprises numerous earthlodge ruins covering an area of over 100 acres. The site is attributed to the Lower Loup Phase, protohistoric ancestors of the historic Pawnee. The village is believed to have been occupied by the Skidi band of the Pawnee during the early seventeenth century. Fifteen lodge sites and five trash heaps, or middens, were excavated, yielding an enormous artifact collection including over 20,000 pieces of pottery. - Listed on the National Register of Historic Places