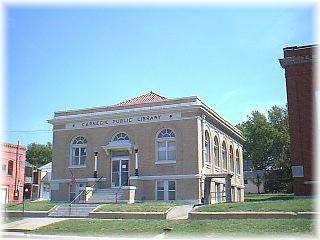 The Herington Library built in 1918 is one of the original libraries built by funds contributed by Andrew Carnegie that is still operating as a library.

In 1897, 10 years after Herington, Kansas was founded, the Women's Mutual Benefit Club was organized and their first project was to make a library.
In 1904, the women finally raised enough money so that they could start dealing with real estate aspects of the project. Forming the Library Association,the women bought the lot, at which the present day public library is located. Finally, in 1910, the library organization began, and in 1918, the present library was built thanks to Andrew Carnegie and his interest in the spread of knowledge through the developing country.

Herington has two city lakes just one mile apart, great for picnicking, boating, skiing, swimming. Along with trophy bass, the city lake is also the best small-lake walley fishing in the State of Kansas. There are full camping facilities with electric hook-ups, boat ramps, and swimming. The "old"

Things to do Carnegie Libraries near Herington, KS