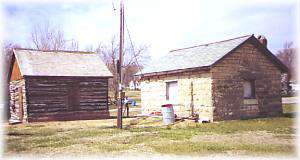 The City Well is a hand dug well enclosed in a native stone building, which was built in 1930. Well No. 3 was one of seven wells of which three were hand jug wells that supplied water to the City of Alma. In 1967, the wells were no longer used and water was obtained from the Alma City Reservoir in order to keep up with the water needs of Alma.

The log cabin was originally located at 102 Kansas Avenue. The cabin had no running water or electricity. In 1948 the cabin was moved to the Clarence Gnadt farm for Mrs. Gnadt's father to live in. The Gnadt property is now being developed into a new 56 lot housing development.