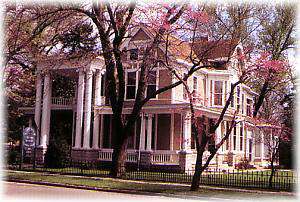 The exterior of the home features Ionic pillars, recessed front door, stained glass window on the west and outside window trim.

The house is full of interesting and original decoration items. The handsome parquet floors were imported from Europe and set in intricate design. The staircase is of handcarved walnut. Light fixtures were originally a combination of electric and gas. There are three working fireplaces. Each window has unusual inside shutters. The home is now a Bed and Breakfast, and tours are welcomed.