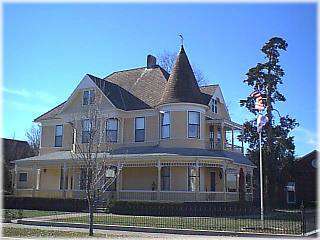 Neodesha has several homes builit in the late 1800s and turn of the century. The beautiful Queen Anne Victorian style home at 7th and Main was built in 1898 by Dr. Allen, grandfather of Dr. Allen Moorhead, the current resident. Another of the late 19th century elaborate homes was built in 1895 by the Forrest Oil Company for its resident head. Forrest Oil Company was later acquired by the Standard Oil Company. Other historic homes on the tour date from 1899, 1900, 1904, 1910, 1913, and 1923.

We currently do not have any events for Neodesha, Kansas in our database. If you know of events taking place, please add the event
.

This tour includes wooden sculptures by Gino Salerno, Lady Justice, high above the Anderson County Courthouse, the gardens of...