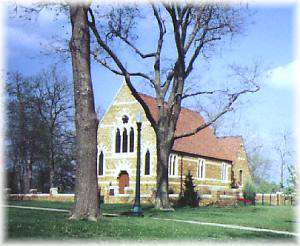 
In 1864, after nearly six decades of meeting in local homes, a small Methodist congregation in Sproxton (pronounced SPRO-SON), England, finally raised enough money to build their own house of worship.


While the English congregation enjoyed the dedication of their chapel that June, Methodist ministers who had founded the first University in Kansas were beginning construction on Baker University's Parmenter Hall.


These two groups of Methodists shared common beliefs. But that was all they shared for more than 100 years until events in 1987 and 1988 set the two communities on a mutual path. That path would eventually lead to the University's first house of worship, a spiritual center where the campus community could worship, meditate, wed, and find camaraderie.


In 1987, Daniel M. Lambert assumed the presidency of Baker University and soon noticed that the 130-year-old campus lacked a place dedicated to worship. Far across the Atlantic, the congregation of the Methodist chapel in Sproxton was dwindling and finally, the church was closed in 1988. The next year, Baker Professosr of English, Dr. Dean Bevan spent a semester teaching at Harlaxton College, Grantham, England, and was asked by Dr. Lambert to look for a building that might fill the University's need for a place of campus worship.


The recently closed Sproxton chapel was very near Grantham, home to Harlaxton College where Baker students participate in an international study program. Dr. Bevan was excited to find such a suitable building so nearby a college with ties to Baker. He also learned that the father of Lady Margaret Thatcher, the former British Prime Minister, had occasionally preached at the chapel in the mid-1930s as a lay minister.


With the blessing of Sproxton villagers and British Methodists, Baker purchased and moved the chapel in 1995. Workers in England carefully dismantled the building, numbering each of the approximately 25,000 stones for proper reassembly in Kansas. The 250-ton structure traveled over 5,000 miles by train, boat, and truck in nearly 200 crates packed with sawdust to protect the precious cargo. More than five tons of sawdust were used, essentially depleting Britain's supply.


In November 1995, the first stone was laid by R.R. Osborne, an Olathe, Kansas, businessman whose $1 million gift fully supported the project. The chapel is named in memory of his late wife, Clarice L. Osborne.


The Chapel's Gothic Revival architecture complements Baker's campus as comfortably as its roots in early Methodism complement the University's founding mission. Exterior ironstone walls 14 feet high support a clay roof of 19,000 tiles that reaches to 31 feet at its highest point.


Leaded stained-glass windows adorn the sanctuary. At the bottom of the left-hand panel of the rear windows is a portrait of the sister of John Coy, in whose Sproxton garden the chapel was originally constructed. The side windows represent Jesus' parable of separating the sheep from the goats, and the rear windows represent His saying, "Let the children come to me." The poem at the bottom of the center picture in the back is of unknown origin, but quite fitting to the chapel's history: "For thou must share if thou wouldst keep that good thing from above. Ceasing to share we cease to have, for such is the law of love."


Baker made few additions and renovations to the chapel. The original pews had been sold before the University purchase the building, so Baker commissioned custom pews. Years of neglect had rendered the chapel's organ unusable by the time Baker purchased the building. The organ has been fully restored.


The 24-foot by 40-foot sanctuary accommodates 100 people. Behind the pulpit is the former music room of the Sproxton Chapel which is today being used as a museum room where items from the chapel's earliest days in Sproxton are displayed. The office of Reverend Ira DeSpain, Minister to the University, is also located in the basement, as well as an informal student gathering area.


Baker University was honored by the presence of Margaret Thatcher at the chapel's October 1996 dedication.

Available for wedding and other ceremonies

Things to do Historic Churches near Baldwin City, KS