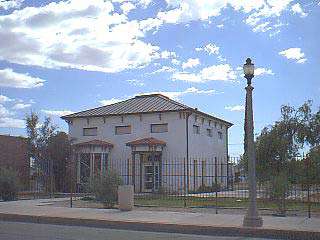 Indian raids on white settlers were common in the 1880s. When William Clarke, a mining engineer, and his wife Ella came to Florence, he devised built-in security in constructing his residence about 1884. The interior contained a ladder reaching to the upper floor in the event of an Indian attack. Once the occupants were safely upstairs, the ladder would be pulled up and a trap door closed.

Listed on the National Register of Historic Places, the Clark House is an excellent example of the Late Transitional mode of architecture, a blending of Sonoran adobe walls and elegantly detailed Anglo-Victorian entrance porch and louvered bay window. In front of the house were large olive trees, lilac bushes in front of the bay window and a climbing rose bush on a trellis by the front door. Evening ice cream socials were held under the olive trees which were strung with lanterns on wires. The interior was furnished with an impressive array of Eastlake period furniture including a square piano which you may see today at the Pinal County Historical Museum.

Arizona's last Territorial governor, Richard E. Sloan, resided here during the time he served as Pinal County district attorney from 1885 to 1888. As a territorial judge, Sloan presided over the first trail of the Pleasant Valley War when the last Tewksbury killed the last Graham.

Now the offices of the Florence Reminder and Blade-Tribune, the building was returned to its former glory by Donovan M. Kramer Sr. of Casa Grande Valley Newspapers Inc., president and publisher.

Things to do Historic Homes near Florence, AZ