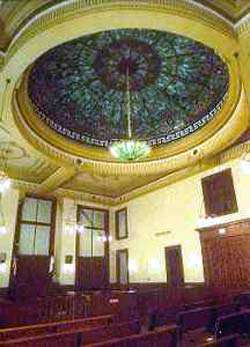 Set among magnolia trees in center of town, the Colorado County Courthouse was built in 1891 in Second Empire style with locally made brick. Listed on the National Register of Historic Places, it features a Neo-classic copper dome and a working, four-face Seth Thomas clock. A magnificent Tiffany-style stained glass dome is above the original 1890 judge's bench, bailiff box, and witness stand in the District Courtroom. To the East of the courthouse, you'll find the historic District Court Oak.

Designed by Eugene Heiner, this building is the third courthouse erected in Columbus, with the first having been built in 1836. One courthouse was to be of pine harvested in Bastrop and floated down the Colorado, but high water sent the wood floating right past Columbus (and not a few surprised carpenters).

Things to do Historic Courthouses near Columbus, TX

This is the fourth structure to serve as the Milam County Courthouse. The local Masonic Lodge laid the cornerstone for the bu...