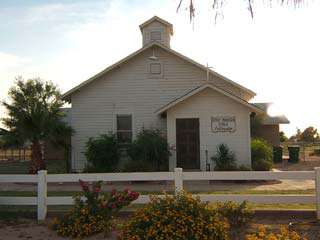 The first Church in Rittenhouse was constructed in 1921 on the east side of Ellsworth Road, just north of the railroad tracks, in the community we all now know as Queen Creek. Although the Historical Society's records don't list her name, a Pennsylvania woman known throughout the United States for donating funding for churches provided financing for the building. Jasper Sossaman, Lee Sossaman and others provided the labor. It was sponsored by the Presbyterian Home Missions and was first served by a retired Presbyterian minister from Phoenix. The school district also made good use of the building by partnering with the Church to hold classes there for a few years.

By the mid-1930s, there were only a few families that continued to worship at this location. So, with the help and advice from the Reverend John Hartman, the congregation acquired a new location in Chandler Heights and relocated the building in 1936. With the picturesque San Tan Mountains as its backdrop and a few improvements over the years, this Church continues to serve the community.