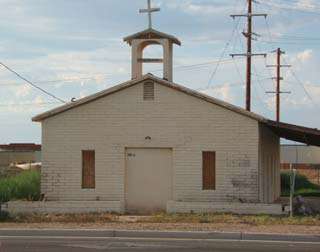 The first Catholic Church building in Queen Creek was constructed in 1960 when the congregation acquired a barracks building from the base, and moved it to this site.

It's the two narrow stained glass windows that may first attract your attention as you pass by the weathered building across from Our Lady of Guadalupe. Even though obscured by afternoon shadows, their beauty entices a second look.

Mexican-Americans have played a vital role in the development of the San Tan area. These honest and hard-working families have contributed significantly to the rich heritage of the communities. We're told that many were isolated by language, cultural and occupational barriers. Many were living in substandard housing and found the customs bewildering. But it was the families and farm laborers that moved to the Queen Creek area in the late 1920s and early 1930s that began, with the help and guidance of Father O'Hern, to organize the first Catholic congregation in the late 1940s.

By the early 1950s, the school district had acquired several wooden barracks from Williams Air Force Base for use as classrooms, the cafeteria and an auditorium. The auditorium doubled as a facility for mass and for the visiting priest to hear confessions. Nuns would also teach catechism classes, usually during the summer.

Although the congregation appreciated the use of the school building, they looked forward to a time when they could worship in their own church. So in 1960, the members started raising money for a building fund by selling homemade items, such as baked goods. Father Patterson of Chandler helped with the purchase of property, and Father O'Hern of Gilbert helped them acquire a barracks building from the base. It was moved to the site on the north side of Ocotillo Road, 3/8 mile west of Ellsworth, and still stands today as a humble reminder of our history.

By 1975, the building was deemed unsafe, and the insurance company refused to renew the policy. New fund raising efforts were started, many under the leadership of Lupe Coronado. In 1988, land was purchased across the street for Our Lady of Guadalupe Church.