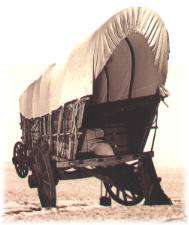 The Conestoga Wagons were used primarily to haul freight on the Santa Fe Trail and other freight trails. They could handle two tons of goods. The wagon in our displayed in the Museum Comples bears the inscription "Joseph Edgar - 1831".

There is a series of 1939 aerial photographs, showing the route of the Trail in the county as well as rut sites and landmarks.