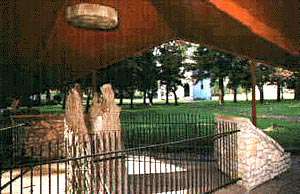 A shelter east of the Neosho River bridge protects the stump of the Council Oak. Gathered in the shade of the big oak on a hot August day in 1825, agents of the Osage tribe and the U.S. government signed a treaty giving Americans and Mexicans safe passage along the Santa Fe Trail through Osage territory in return for $800. (At that same time, the city was named for its role as a council site for treaty negotiations and its extensive grove of hardwood timber.) Before the Council Oak blew down in a windstorm in 1958, the tree stood 70 feet tall and measured 16 feet around.

Things to do Landmarks near Council Grove, KS