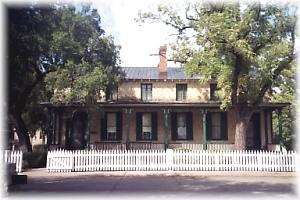 Constructed in 1855 of native limestone, the Custer House is the only surviving set of quarters from the Fort's earliest history and authentically depicts military life on the western frontier during the Indian Wars Period. It is largely unchanged from its original design and furnished with period furniture from the period between 1880 and 1890. It is believed that General and Mrs. Custer occupied either this or the sister-set of quarters (#21) while stationed here in 1866.

Custer House is open to the public for visitation, and guided tours are provided by members of the Fort Riley Historical Society.