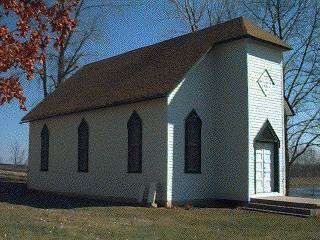 Edmonds Chapel stood 4 1/2 miles north of McLouth, Kansas, for more than 75 years. Edmonds Church was an affiliate of
the United Brethren in Christ (UB), though people from many denominations worshipped there down through the years.


United Brethren ministers were working in northeast Kansas as early as 1854. According to a paper prepared for the homecoming of the McLouth UB Church in 1933, the first official records of the circuit, which later became Edmonds chapel, date from 1868.


The church was first organized and met at the Round Grove schoolhouse, then a log building, three miles north of McLouth. Services were held at Round Grove until the congregation became so large that a group nearer McLouth decided to build a church in town. The town church building (now the Church of the Nazarene) was completed and dedicated in 1888. The families of the north then built this building.


Under the leadership of trustees Thomas Edmonds, Edward Sheldon, Hugh Cosgrove, Amos Edmonds and John Martz, the church purchased half an acre from Hugh and Lavina Cosgrove, at a cost of 20 dollars. Ed Bradford was the contractor. The new church was dedicated on Sunday, September 13, 1891. The folowing account, written by Pastor J.T. Reynolds, was printed in the McLouth Times for September
18, 1891:


"The United Brethren Church 4 1/2 miles north of McLouth was dedicated to God the 13th inst, by Rev. C.M. Brooke, A. M., officiating, preaching two sermons to the edification and delight of the large audiences which assembled to witness the ceremony of dedication. There was supposed to have been 500 persons in attendance at the morning service, many not being able to get in the building. Prof. Brooke asked for $400, to clear the house of debt, and secured $525 after which the house was set apart for the worship of God. The United Brethren has built and dedicated two houses in this county since the first of March, and will probably build two more within a year."


"Quite a large delegation from here attended the dedication of the new church, two miles south of Hebron, last Sunday...The church is a large structure, beautifully finished, and an immense crowd listened to the ceremonies. The president of Lane University preached the dedication sermon...The church and audience were photographed after the service."


Many traditions were passed along in the more than 75 years of continuous service to the community. One of the great traditions was the annual ice cream social held every summer. The men and women of the community would meet together, make the ice cream, and enjoy fellowship together. In those days the ice was cut during the winter and stored in ice houses on farms, packed in sawdust to keep it from melting. There was a well with a pump and a tincup for everyone to drink from. Folks didn't worry about germs then. One person said mixing them all together was what made everyone so healthy.


There was always a Sunday School picnic on Easter Sunday, with a good ballgame in the afternoon. Fifty years ago, attendance at young people's meetings and parties ran to 65 or 70.


A basement was constructed under the church in 1944, when E.C. Edgar was pastor. Stone for the basement walls was donated by Father Kelly from the abandoned Catholic Church at Springdale, four miles east. United Brethren Bishop V.O. Widler dedicated the basement and brought the morning message. The church interior was refinished in the late 1940's, during the pastorate of Paul Life. All materials and labor were donated.


Edmonds Chapel, including all its fixtures, was sold to the Jefferson County Historical Society for one dollar and was moved to Old Jefferson Town in 1970. The cost of the move was paid for by the Edmonds family. Some of the items displayed in the chapel are from St. Paul's A.M.E. Church of Oskaloosa. There is a baptismal font from the Chorpus Christi Catholic Church of Mooney Creek (NE Jefferson County). There is also a pump organ which provides music for an occasional service.
The church has recently received a face lift. A new roof, ceiling, floor refinished, air conditioning and heating added, carpet removed and light fixtures reworked. This chapel is a beautiful building to use for weddings, funerals, and baptisms.The chapel is also handicap accessible.

Things to do Historic Churches near Oskaloosa, KS