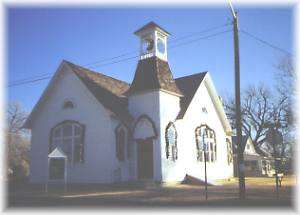 Reverend G.V. Albertson joined the great race into what is now Blaine County and staked a lot for the Presbyterian Church in Watonga. In December of 1901 eleven members met to organize a Presbyterian Church. The cost to build the church was $1,387.99. Wages were paid to workers on the church were $2.00 a day.

The Church was dedicated Sunday, June 14, 1903. The Ferguson Chapel Presbyterian Church was an active church in Watonga. from 1901 to 1972.

Restored in 1992, the Chapel is available for Weddings, Meetings, and Historical Events.

Things to do Historic Churches near Watonga, OK