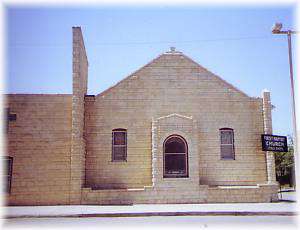 The adjacent church was originally built in 1909 as the Modern Woodmen of America hall. The First Baptist church purchased this building in 1913, remodeled it and dedicated it on December 16, 1917. Additions to the south side of the building were made in 1949 and in 1983, and numerous interior and exterior remodelings have also taken place.

Things to do Historic Churches near Junction City, KS