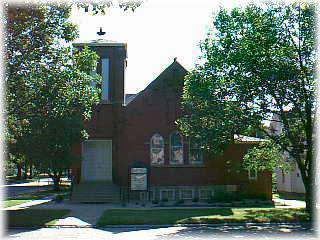 The First Congregational Church was organized at Eldred, 12 miles northeast of Wahoo. Rev. Mr. Giddings was the preacher for both Eldred and Wahoo. The organizational meeting was headed by Rev. J.E. Heaton and took place on May 28, 1871. In 1880, a church was erected on the southeast corner of 5th & Beech. It was 24' by 40'. In 1883, the building was moved to its present location. On February 13, 1908, the church building was practically destroyed by fire. On August 21 of the same year the corner stone of the present edifice was laid. Jacob Ort was the architect for the church and the present parsonage. S.P. Wahlstrom was the contractor for the church which was constructed at a cost of $4,195.