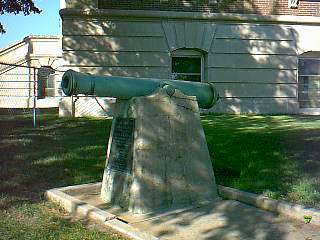 
"This cannon was left at Fort O.K. August 22, 1865 by Major J.R. Curtis 'for the protection of the settlement against attack by Hostile Indians'."

Things to do Landmarks near Grand Island, NE

National Historic Landmark - The Palmer Site is the location of a Skidi Pawnee village occupied from 1804 to 1844. The...