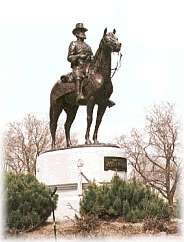 The equestrian statue that overlooks Memorial Park was dedicated in 1917 in a ceremony that attracted 40,000 persons. The statue was cast in standard government monumental bronze and the base is formed of granite. A similar statue is located in McPherson Square in Washington, D.C. The city and county of McPherson bear the name of the highest ranking Union Officer to die on the battlefield during the Civil War, General James Birdseye McPherson.


Come visit us in McPherson, Kansas

Things to do Memorials near McPherson, KS