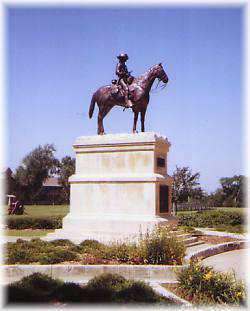 The Old Trooper has become a symbol at Fort Riley of the proud heritage of the Horse Cavalry. It is modeled after the drawing of "Old Bill," the cavalry soldier drawn by famous western artist, Frederic Remington. This sketch is displayed in the Cavalry Museum's Art Gallery. at the foot of the monument is the grave of "Chief," who died in 1968. He was the last cavalry horse to be carried on Army rolls. He is interred upright in a special casket constructed by the Post Engineers that allowed him to be buried in this manner.

Things to do Memorials near Fort Riley, KS