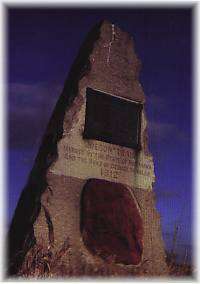 This monument is situated on a grassy knoll of a field. On April 26, 1849, 25 members of the Boston-Newton Joint Stock Association left Boston, Mass., to travel overland to the gold fields of California. On May 29, at Soldier Creek, near present-day Topeka, Kan., one of the founders of the association, 25-year-old George Winslow, a machinist from Newton Upper Falls, was suddenly taken violently ill with cholera. The company remained in camp for three days, and Winslow appeared to be recovering. Late in the afternoon of June 6, the company reached the point where the Oregon-California Trail crosses the present Nebraska-Kansas state line. There, David J. Staples, Winslow's brother-in-law, described a "terrific thunder shower, lightning flashes sometimes dazzling to the eyes. Rain falling in torrents." Goerge Winslow's death probably resulted from exposure to the storm. At 9 a.m. on June 8, "painlessly as though going to sleep, he died." A headstone inscribed "Geo. Winslow, Newton, Mass." was set at the head of the grave. On a footstone was the year, "1849". The headstone is now incorporated in a granite monument, erected Oct. 29, 1912, through the efforts of George W. Hanson of Fairbury, the state of Nebraska, and the sons of George Winslow. There is at least one other emigrant grave on this rise of ground between the forks of Whiskey Run Creek. On May 23, 1850, Elias Gaggy wrote: Travel five miles the road making several sprangles which now come together --- where there are two graves --- Geo. Winslow --- Newton Mo. (Mass.) age 25 --- 1849 & R. Depew --- St. Louis, Mo. died June 25th, 1849, age 62."

Things to do Monuments near Fairbury, NE