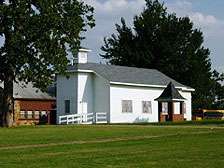 The oldest continuously operated Christian children's home in America, Goodland is located two miles south of Hugo. Operated by the Presbyterian Church, the home continues to enrich the lives of young men who are residents of the school.

The Church building served for 42 years as both school and church for the area. Renovated several times since being built in 1852, the same church -- restored and enlarged -- stands on the Goodland campus today along with an 1834 log cabin school.

Things to do Historic Schoolhouses near Hugo, OK